Approximately 7pm, EST, August 8, 2022
Donald J Trump
@realdonaldtrump (on Gab, where they put anything he posts in the account they created for him, which includes EVERY Tweet he ever posted)

BEGIN QUOTE
These are dark times for our Nation, as my beautiful home, Mar-A-Lago in Palm Beach, Florida, is currently under siege, raided, and occupied by a large group of FBI agents. Nothing like this has ever happened to a President of the United States before. After working and cooperating with the relevant Government agencies, this unannounced raid on my home was not necessary or appropriate. It is prosecutorial misconduct, the weaponization of the Justice System, and an attack by Radical Left Democrats who desperately don’t want me to run for President in 2024, especially based on recent polls, and who will likewise do anything to stop Republicans and Conservatives in the upcoming Midterm Elections. Such an assault could only take place in broken, Third-World Countries. Sadly, America has now become one of those Countries, corrupt at a level not seen before. They even broke into my safe! What is the difference between this and Watergate, where operatives broke into the Democrat National Committee? Here, in reverse, Democrats broke into the home of the 45th President of the United States.

Hillary Clinton was allowed to delete and acid wash 33,000 E-mails AFTER they were subpoenaed by Congress. Absolutely nothing has happened to hold her accountable. She even took antique furniture, and other items from the White House.

I stood up to America’s bureaucratic corruption, I restored power to the people, and truly delivered for our Country, like we have never seen before. The establishment hated it. Now, as they watch my endorsed candidates win big victories, and see my dominance in all polls, they are trying to stop me, and the Republican Party, once more. The lawlessness, political persecution, and Witch Hunt must be exposed and stopped.

I will continue to fight for the Great American People!
END QUOTE

Dying to be Replaced, How You Can do Your Part for the ‘Great Reset’ and ‘Great Replacement’ 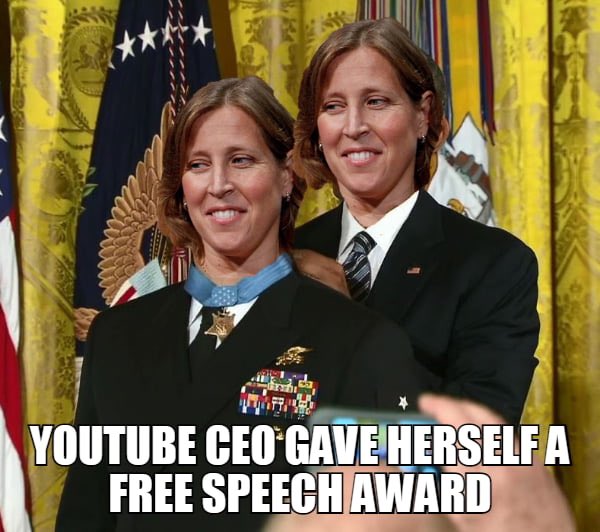 Reply from Tom GFY PhD 🌸 @tjerubbaal (with "thanks to @9GAG") to "YouTube gives “Free Expression Award” to YouTube CEO, handed her to her by Youtuber. Actual YouTube viewers less than impressed." by Dave Rubin @RubinReport both on twitter.com. The CEO is Susan Wojcicki.
Spread the reality, RealityShed.Com --

Leftists love to preach about ‘diversity’ (which is usually code for anti-white and/or anti-Western), and also about supporting ‘strong women’, but when confronted by videos featuring views from two of those recently, Google owned YouTube decided to prevent them from being watched.

The left’s continued use of censorship on platforms they insisted existed to express free speech is a form of terrorism. They want us to be afraid to speak openly in opposition to their communism. People like Conservative Activist Laura Loomer have endured such censorship for years now, so while we are certain it still stings, this latest example is probably like water off a duck’s back to her now, and the YouTube video in question has already been moved to Rumble.

Giorgia Meloni likely isn’t as used to it, but as with Loomer, she is a truly strong Conservative woman and she will adjust to her new life as Prime Minister of Italy and the daily attacks from the alt-far-left-MSM. And she can now use her new power to go after Big Tech, since they just ‘fired the first bullet’ against her, so to speak.

We here at the shed got a notice from Google 3 days ago stating one of our articles (the one with the picture of Harris, Biden and Obama walking together) contained “sexual content” and advising us they won’t serve ads to it unless we change it. We changed NOTHING, because free speech, and they are still serving ads on that page, PLUS the ‘notice’ vanished from our AdSense account. Chalk one up for the good guys standing their ground (not that those ads generate much anyway, so one page is no real loss).

The experts on PUSHING disinformation over at Google decided that Loomer’s video “violated its policy on misinformation” but refused to say how although it is believed to be mentioning election theft (which is habitually done by leftists when they fail to steal elections, covered by us HERE, HERE, HERE and HERE). Google are not only election theft deniers, they helped steal the 2020 election.

Loomer is so dangerous to Marxist Big Tech that they have banned her from PayPal, Twitter, GoFundMe, Uber, Stripe, Facebook, Lyft, Venmo, and whatever the fuck Clubhouse is. That makes 10 companies, including Google, deserving of a boycott.

Similarly, they said that Meloni’s video violated “community guidelines” and again gave no indication of what that means. This is a suppression tactic which the left is famous for yet, in true Saul Alinsky ‘Rules For Radicals’ fashion accuses us of. The real trick is to notice those who are supposed to be on our side that the left never attacks! Watch that group like a hawk. Here are the two ‘banned’ videos (still on Rumble)…

VIDEO ABOVE: “Giorgia Meloni’s 2019 Courageous Common Sense Speech (with English subtitles)” given to ‘World Congress of Families’ and reposted with translation by Robert W Malone MD (YES, the mRNA guy). 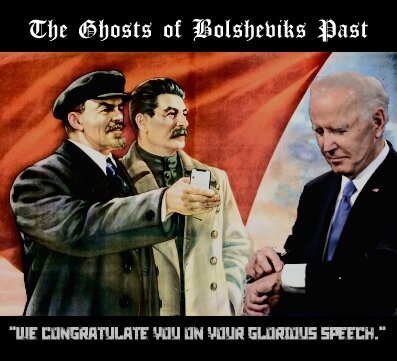 '...Bolsheviks past' by unknown from crossicus_rubiconus via patriots.win
Spread the reality, RealityShed.Com --

First, it was ‘ghost guns’, which isn’t a real thing unless you are trying to do an end-run around the Second Amendment. Then it was ‘ghost voters’ (dead people voting, illegal aliens voting, or democRATs voting multiple times per election), and now it is GHOST ghosts. Just in time for Halloween season too.

At a White House conference today (Wednesday, September 28, 2022) on something to take your mind off of him destroying America’s economy 100% intentionally, Joke Bitem (AKA Usurper in Thief Joe Biden) did a shout out to a Republican Congresswoman asking repeatedly where she was in the room…despite her having died almost 2 months earlier (on August 3, 2022) in a car crash.

“Jackie? Jackie are you here? Where’s Jackie?” Biden asked today. “I didn’t think she was going to be here.”, he continued. Meanwhile, 8 weeks prior TO THE DAY he had issued this statement, “Jill and I are shocked and saddened by the death of Congresswoman Jackie Walorski of Indiana along with two members of her staff in a car accident today in Indiana.”

Joe shakes hands with air, and even half of his ‘Twitter followers’ aren’t real. And typical of the alt-far-left MSM, Senior White House Correspondent for (Verizon owned) Yahoo News, Alexander Nazaryan, who was doing the official White House Print Press Pool report, decided to pretend the conference call out did not happen.

Just remember, if we were to impeach Joe, then Kamala Harris is insta-POTUS, and it is all democRATs the rest of the way down, going next to Nancy Pelosi then Senator Patrick Leahy (D, Vermont), then cabinet officials.

The Elkhart County Indiana Sheriff determined Walorski’s vehicle, which was being driven by her district director Zachary Potts, and also contained communications director Emma Thomson, had crossed over the center line, causing the crash. Edith Schmucker was the only occupant of the other vehicle and also died. All four were wearing seat belts.

Some sources claim Walorski was “a bridge-building moderate”, while others said she was pro MAGA. She had represented Indiana’s 2nd Congressional District since 2013. We didn’t follow her career but this video leads us to believe she was NOT a RINO, as well as the second video with details about her death.

VIDEO ABOVE: Remembering GOP Rep. Jackie Walorski: Putting Indiana Interests Before the Swamp, “1963-2022: In honor of Jackie Walorski’s life and fight for the everyman.” by Breitbart via bitchute.com

VIDEO ABOVE: Was Rep. Jackie Walorski MURDERED?, “This is the FIFTH Congressional House member to die this year. Coincidence? You decide.” by kriszane via bitchute.com

Rumor is that Walorski was working with Anne Heche on ending child sex trafficking (and that Heche was doing a documentary on the subject). Anne then died 8 days after Walorski in a very bizarre situation which includes video of her trying to get off the ambulance gurney and being pushed back on before it disappears inside the vehicle (see video). Strange stuff. 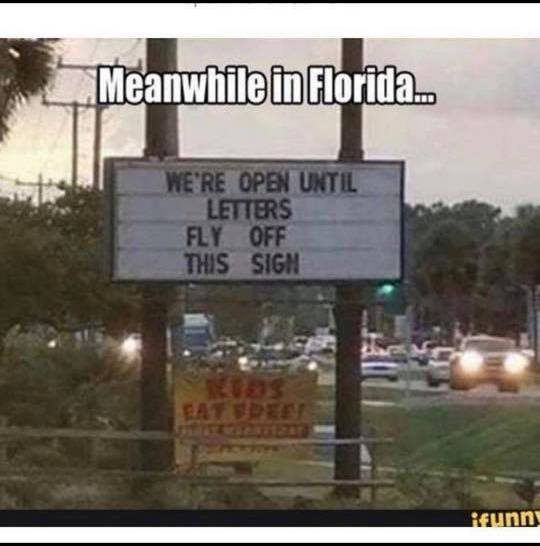 '...fly off' by unknown from ifunny via kidactivitieswithalexa.com
Spread the reality, RealityShed.Com --

Minnesota Senator Amy Klobuchar (D is for Disinfect), who once famously berated a staffer for forgetting a plastic fork for Amy’s airport salad, then made the staffer clean the comb Amy decided to eat the salad with on their plane flight, is trying to solve problems and our election system keeps getting in her way.

She went on MSNBC (which is Swedish for flooding America with illegal aliens), using the ‘Morning Joe’ program and host Joe Scarborough (whose intern Lori Klausutis mysteriously died right before Joe suddenly left Congress AND the Republican party, then had an affair with his married co-host, also being married himself) to push her delusions.

Klobuchar, who ran for POTUS in 2020, insinuated that democRAT policies will do “something about climate change” and therefore hurricanes, saying that is why people must vote communist in the November 8, 2022, general election. She was hinting that ‘Hurricane Ian’, which is hitting Florida today, wouldn’t exist if we just capitulated to the alt-far-left.

Amy also claimed that “women could be facing a grave crisis when it comes to their own control over their health care choices”, forgetting that killing your baby (which is 50% from the DNA of the man you made the child with) is NOT ‘health care’ but IS murder as that child is a unique being with Rights just like Senators have.

She also claimed that “We have done many, many things on a bipartisan basis”, but coaxing RINOs into voting for leftism isn’t difficult and also isn’t really bipartisan (and in fact they claim that with as little as one RINO vote)!

democRATs are in favor of abortion up to the moment of delivery, and some of them (former Virginia Governor Ralph ‘blackface’ Northam, for one) want to be able to kill the child even AFTER delivery. What the left want is for you to be gone, regardless of age.